I love flight journeys, especially the part when the plane takes off the ground! The earth is pulling you back while the plane’s mechanism is putting in power more than the earth’s gravity.

The moment when the wheels leave contact with the ground and you feel like a feather, floating in the air can’t be expressed in words.

Every time I experienced this exhilarating feeling, I wondered what if there was no plane in between? What if it was just me, floating in the air, flying with the wind? My dream finally came true when we decided to go Paragliding near Kamshet with Nirvana Paragliding.

Our journey started from Native Place (their guest house) after a quick lunch at about 3 p.m. They have different sites & ideal times for flying depending on the season. Being mid-April, afternoon was the ideal time.

The sun was shining at its best, but the temperature was tolerable until we had to get out of the vehicles.

As we set out for a short trek up the ridge for the take-off site, I felt the burning from overhead and burning in legs (out of lack of physical activities in recent months). Taking it at my own pace, I finally managed to climb up (secretly cursing myself for going through all of this).

I remembered one of my friend’s words as I climbed up, “Why to excruciate your own body by climbing up the hills when you can lazy around in an Air Conditioner?” I asked myself the same question but having done a few treks earlier, I knew that it is all worth it in the end.

As we reached the ridge, the instructors were readying their equipment while others were catching their breaths.

A strange mixture of nervousness, curiosity and excitement was creeping up as we heard the instructions and filled in the forms with contact details in case of emergency.

One day prior to the flying day, I had talked to a friend who had tried Paragliding, and she had told me that you are required to run some distance till and beyond the end of the cliff and that according to us was the most terrifying moment.

Having done Rappelling earlier, I knew that it is scary to step beyond the visible ground. You see we are the kind of people with both our feet on the ground, so the feeling to take them off the ground even for a few minutes sounds scary (wink).

We lingered around to let somebody else fly before us, just to assure ourselves that it is OK, and if possible learn from their mistakes.

But we couldn’t put it off for too long, as the instructors had to complete the Tandem paragliding sessions, to be able to focus on the students who were there for their elementary/advanced courses in paragliding.

So I braved it first.

But luckily, I never had to face my fear of running to the edge, nor did I have to run. Thanks to the wind and skills of the pilot I was flying with, it was a matter of 3-4 seconds and I was lifted in the air before I realised.

Hubby dear had to run a few steps but still was lucky as he didn’t have to go all the way till the edge.

After being airborne, I forgot about everything else. We quickly gained height and soon were flying at the same height as windmills on top of the same hill, we had taken off from.

It was a dream come true for me, just me in the air and no plane in between. With widespread eyes & a large grin on my face, I was looking all around, farmland on one side and the hill on the other, a lake shining in the bright sun in distance and sheep grazing nearby.

Although I was cursing Sun only a few minutes ago, now the setting sun was creating a wonderful backdrop for all that.

A Nice cool breeze was brushing my face, there was not the slightest hint of the heat we had faced while climbing up.

The instructor/pilot made me at ease within first few minutes after taking off, making it easier to chat with him. After flying for a few minutes the instructor asked me whether I would be interested in doing some stunts. I said ‘Yes’ instantly and he moved the glider in a circular motion, sometimes with our feet parallel to the ground. A sudden rush of adrenaline passed through my entire body.

For hubby, his pilot swayed sideways a few times, but he felt something different rushing through his body alongside the adrenaline and he had to ask the pilot to stop.

Before I realised it, it was time to come back to the ground reality. As we started descending, I took one last look at everything around me, as I knew that these are the moments I will remember for rest of my life (unless I go back for a pilot course).

The feeling of the ‘first’ experience always remains with us, no matter how many more times we do the same activity, be it the first time you were able to move your hands and legs in coordination while learning to swim or be it your first flight.

The landing was as smooth as the take-off. I landed in the first attempt, while it took 3-4 rounds for the hubby to get back to the ground due to wind conditions.

And when they landed, they couldn’t put their feet firmly on the ground and were dragged a short distance, though he escaped with a few scratches on his elbow. But we have learned with prior experiences of adventure activities, that it is all part and parcel of it.

After resting for a few minutes while watching others go through the same exhilarating experience and the ups and downs of the emotions, with one thing common, a broad grin on all of their faces when they landed, we headed back to the lower ground and parking area with our spirits still soaring high in the sky.

1) Carry enough water with you, at least 1 litre per person, more the better.

4) Make sure at least one person from your group remains on the ground for emergency as well as recording your take-off and landing moments, so rather than flying together, take it in turns.

5) Don’t forget your camera to capture this lifetime experience, we used a GoPro to record it all.

This post was published as part of the #AtoZChallenge. It is one of the chapters in my recently published travel book – Off Beats 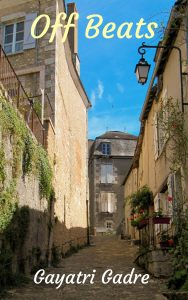 One Reply to “Paragliding at Kamshet”