This post is written by Prasanna Kini as part of the 6th anniversary celebration of my blog.

For those who have read my previous guest post for Shalini Baisiwala, this one is a continuation of my stay in the beautiful country, BELGIUM. As stated in my earlier post, I would not have done justice to each of these spectacular locales if I did not dedicate an entire post to them. So here it comes, my tales in the urban, modern but at the same time traditional, capital city of BRUSSELS.

We arrived in Brussels via train from Amsterdam. It was almost evening by the time we reached Brussels Centrale Station. So we decided to first head to our “Aparthotel” (apartments rented out like a hotel) CITADINES ST KATHERINE (booked through www.booking.com). The place was lovely and cosy, situated around a couple of kilometres from the city centre. The apartments were very well equipped and gave us the luxury of a laundry service for a nominal fee. It was also centrally located and had lots of restaurants, convenience stores and supermarkets situated a stone’s throw away.

Having freshened up and settled down in our rooms, we decided to explore the neighbouring places and ventured out for a leisurely evening stroll. The evening was young, but the people were already out to make the most of it. The tables were already laid at the numerous roadside cafes and people were already beginning to trickle in for their evening drinks and meal. There was a different aroma coming out from each of the eateries and we were spoilt for choice. Here I have to mention that Brussels is known for its seafood specials, although we could not try any being vegetarians.

After a short walk, we reached a huge open square surrounded by the Town hall on one side and the Museum of Brussels on the other. This was the GRAND PLACE or GROTE MARKT, the central square of Brussels. One cannot miss the architectural beauty of these buildings. They were also spectacularly lit up as it was almost dark. The energy and vibrancy of this place immediately sets the mood for the evening. You can also treat your taste buds at the many eateries, cafes and chocolatier shops around this place.

A small detour from the Grand Place takes us to what is one of the most well-known symbols of Brussels, Manneken Pis. This literally means “Little Man Pee(ing)” in Dutch. This is a small bronze statue of a boy passing urine in a fountain. This statue is believed to have been installed during the early 17th century and has many legends woven around it, although I am not sure which one is true. 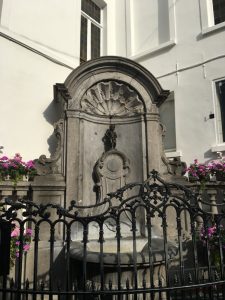 Enroute to the Manneken Pis stands a nondescript building with an entire wall dedicated to one of the most celebrated cartoon characters of my childhood days…..TINTIN. The birth of Tintin is believed to have been in Brussels as he was created by Belgian cartoonist Georges Remi. They have an entire museum dedicated to this adventure loving detective of our childhood years, MUSEE HERGE. 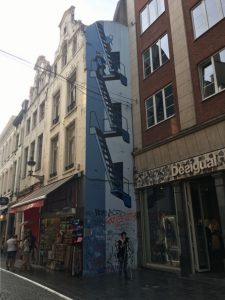 After walking around and filling our senses and stomach to our hearts’ content, we decided to call it a day and headed back to the hotel.

The next day, we decided to spend the day at the ATOMIUM. This is one of the most spectacular structures I have ever seen. It was originally constructed for an Expo in 1958, but continues to stand as a museum at present. The Atomium depicts nine iron atoms in the shape of the body-centred cubic unit cell of an iron crystal, magnified 165 billion times. One can get a breath-taking view of Brussels from the topmost sphere which can be accessed by a super-fast elevator. Other spheres are home to various exhibits and engineering models giving information about how the Atomium was built. This is a MUST-SEE when in Brussels. 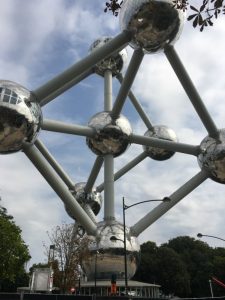 This is a small park located just beside the Atomium, showcasing various miniature buildings and places of interest from various cities in Europe. Roughly 80 cities are showcased here. It’s a good place to spend an hour or two and has lot of options for photo-props. 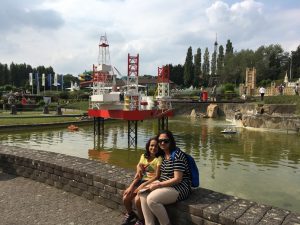 Other than this there are lot of places to see around Brussels, but unfortunately we ran out of time.

Seafood for those who love it 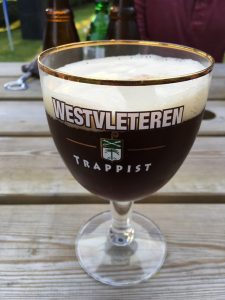 So the next time you feel like taking a break, pack your bags and head to this beautiful European Paradise to rejuvenate your mind, heart and soul!!!

Prasanna is an Anaesthesiologist by profession. Graduated from medical schools in Bangalore and Navi Mumbai. Presently working at a Corporate Hospital Chain in Mumbai. She is a fitness fanatic, recently discovered the pleasure of running Marathons and completed the Standard Chartered Mumbai half marathon in Jan 2017. Stumbled on to blogging, thanks to Karishma & Anagha, trying her best to fit in. Passionate about dance and training in Bollywood and contemporary dancing at present.