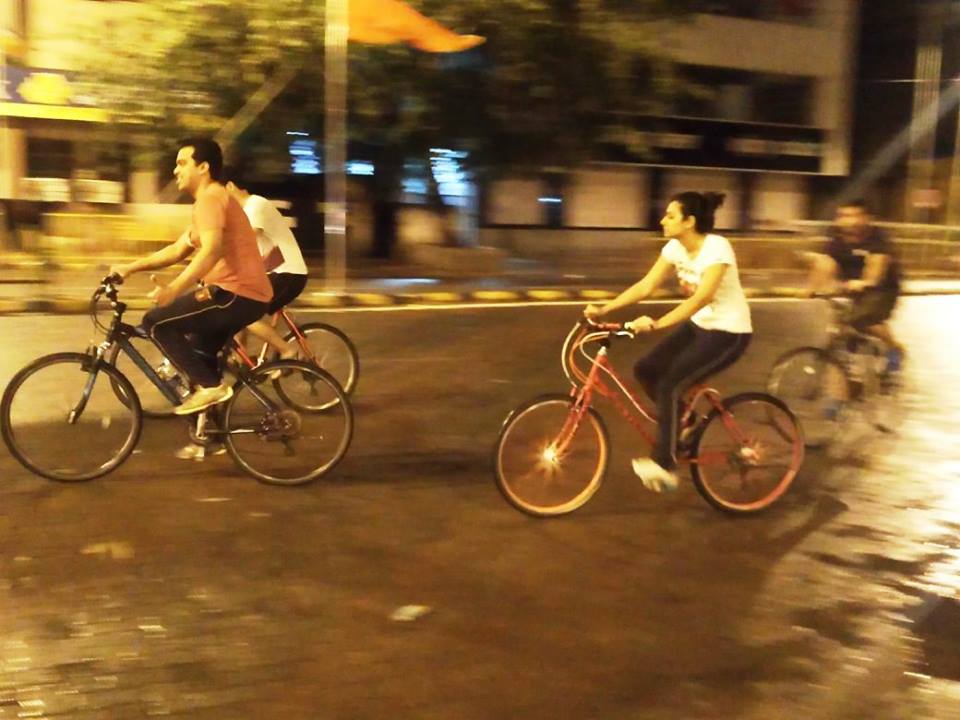 We have decided to celebrate our birthdays & wedding anniversaries in some different way every year. While looking out for new destinations & activities for this year’s anniversary, I came across an event on Facebook, published by Some Place Else – Midnight cycling trail from Bandra to Worli and back to Bandra. The attraction was to cycle through 3 lovely promenades of the city – Bandstand, Carter Road & Worli Seaface.

We were apprehensive about our stamina to cycle such a long distance. I had cycled for 11 km once and that was the longest I had cycled in one go my entire life. Kedar had never cycled even that long. However we had to start at some point and this sounded exciting. It was a night trail, so the weather was going to be pleasant & there was no need to worry about traffic. Apart from our stamina, the other worry on our mind was rain. It pours like crazy in Mumbai during monsoon. Given a choice people wouldn’t prefer to leave their houses during 3 months of monsoon. It is difficult to even walk for few meters without getting wet even with an umbrella. Cycling in such rain was certainly going to be demanding. It sounded crazy yet exciting.

The weather couldn’t be more appalling for our feat. It was pouring since morning of the trail, without a single break. By the evening, news had started coming in about water logging in many streets of Mumbai. Now we were not even sure about making it to the starting point, as we had to drive for 35+ km to reach there.

I had started cycling about 6 km once a week over last 1-2 months and it had given me confidence that I could stretch myself up to 10 km. We were worried what would we do if we can’t complete the trail. How would we take the cycles back to the starting point. Its funny how our brain limits us. We tell ourselves that ‘we can’t’, even before we try it. We worry about various things that may go wrong and what will we do, if things indeed go wrong. Each one of us has fears and apprehensions. I had decided to at least reach the starting point even if I think I can’t cycle for even 1 km.

Fortunately the rain took a break couple of hours before we started from home. We had not expected so many people would turn up in spite of the heavy rains. As promised the trail leaders kept it slow paced to accommodate even amateurs like us. The goal was to enjoy the journey rather than reaching the destination. Rains somehow favored us. There were light drizzles, on and off, but no heavy rain. As we reached Band stand, we felt that all the efforts to overcome our fears and apprehensions were worthwhile, it was lovely to be there. It hardly felt like past midnight as there were many other people enjoying the rain at Band stand, some were busy taking selfies outside ‘Mannat’ the bunglow of bollywood superstar Shahrukh Khan. As we started chatting with other members of the group, we realised that we were not the only ones in doubt about our capacities. It was good to meet other ‘crazy’ people like us, crazy enough to cycle through night. 😉

When we moved to Mumbai 4.5 years ago, we had decided to explore Mumbai city as much as possible. Keeping up with that promise to ourselves, we had been to many parts of the city including the graffiti lanes in Bandra & 400 years old St. Andrews church. While cycling along the lanes and St. Andrews church, all those lovely memories came back to us. We both had heard about some area names in Mumbai, but had never been to those, Carter Road was one of them. Being a non mumbaite, I hardly knew the significance of these places till couple of years ago. Discovering the city I once despised of, has been completely different kind of experience. Once I thought that there was nothing more to this city than rush, crowd and earning money. But visiting many places during last 4 years has proved every bit of my opinions about this city wrong.

By the time we passed Lilavati hospital Bandra and started cycling towards Dadar, we were more than enjoying our ride. Mumbai truly is a city which never sleeps. On many occasion I have experienced this fact, and yet every single time I find it amusing. There was hardly any time without people, taxis and cars on the roads. People are always on the move here. Being the month of Ramazan there were many people roaming around visiting food stalls in the city, giving a feeling of late evening. I wouldn’t have believed it was past midnight if I wasn’t wearing a watch.

By the time, we reached Siddhivinayak temple (about 18-19 km ride since we started), I was completely tired. My knees & legs were aching and I was feeling fatigued. I couldn’t carry on anymore. Though initially the trail leader had told us that any moment when we want to give up, we can hail a taxi and carry the cycle on top of it back to starting point, they offered me a ride in their safety vehicle till the Worli Seaface. Kedar carried on his ride with rest of the group. Reaching Worli Seaface was the highest point of our journey. Sitting at the promenade at 3.30 early morning, listening to the sea waves & rain, enjoying well deserved snacks and coffee, the memory is etched in my mind for lifetime. No amount of money, luxury resort stay, expensive gifts could have matched this unique experience. Our anniversary had truly become unique for us. No wonder we can easily count and remember each anniversary and birthday together, each one of it is unforgettable and unique like this one.

We both had thought that probably we will be tired even before we leave Bandra, but surprisingly we sustained for much longer. While I stopped riding after 18-19 km at Siddhivinayak temple, Kedar completed the complete trail of about 27 km. He got best of the both worlds. As we enjoyed riding together till Siddhivinayak temple, he rode alongside other people and made some new friends after I retired. We had both pleasantly surprised ourselves. It reminded me of a TV program where they had showed that we perform much lesser than the actual capacity of our muscles when it comes to exercise or any other physical activity, as brain instructs us to give up much earlier than the actual capacity.

It truly was an anniversary to remember for lifetime.

One Reply to “Midnight cycling”