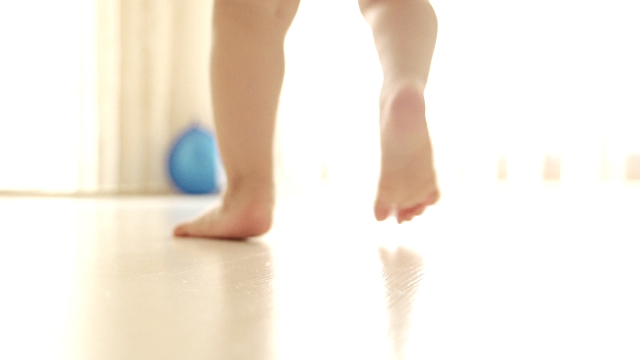 Once upon a time, there lived a boy named Mihit. Mihit was a happy child who was loved by everyone in his home and neighbourhood. He was the apple of his mother’s eyes. She would never let him out of sight even for a blink of an eye.

One day, shortly after his first birthday, Mihit crawled all the way to the coffee table, reached for the edge with his tiny fingers and before his mother could run all the way from the other end of the room, pushed himself up.

The table moved with his force as he stood up, slipped some distance and before mom could grab him, Mihit lost his balance. He screamed with pain as he fell down. Mom quickly picked him up and hugged him tightly.

For a few days after the fall, Mihit kept away from the monstrous table who had hurt him. But soon he got bored of crawling and decided to make another attempt at it.

As he reached for the table’s edge, mom rushed to him and sat him back down saying “It is too early for you Mr. You are only one, what’s the hurry? You will only get yourself hurt”.

Hearing this Mihit crawled back to his toys and continued playing. Next day, he was all set to try the feat again.

But again mother picked him up well in time and carried him to another room. This went on for a few days. Every time he was tempted to push himself up, out of fear of him getting hurt, mom would stop him by either forcing him back down and picking him up.

After some futile attempts, he stopped trying. He was happy crawling and mom was happy that he wasn’t getting injured.

After his second birthday though, his parents started to worry.

All the other children of his age around them had started running by now, but Mihit was yet to take his first step.

After waiting for few more days, they decided to visit a Doctor. After checking him thoroughly, all doctor could say was that there was nothing wrong with him, and some kids just take longer to walk or speak.

They unanimously decided to wait for a few more months. When Mihit turned three his mother had started to lose hopes. Her son, her only child was unable to walk.

They visited numerous doctors, did endless tests and each one of them stated the same thing, there was nothing wrong with Mihit or his legs.

They visited an internationally acclaimed child specialist.When he forcefully held him in a standing position, his knees gave away. “All I can say is his leg muscles do not have enough strength to support him,” he said after an hour of examinations & tests.

Time flies even faster when one is engrossed in life’s worries.

Mihit turned four in no time and it was time for him to go to school. His mother had lost her sleep worrying about how will he manage all by himself in the school, how will other kids treat him and how will he face the enormous world out there.

She carried him to school on his first day and stood outside the classroom with other mommies. The kids around him were crying, running back to the door to their mothers while Mihit sat in a corner wide-eyed, too scared to move anywhere.

He was so confused about what was happening, that he didn’t even cry. He had seen so many kids from a window when kids in his neighbourhood played and he watched from a safe distance.

He had never seen them so close. Watching them running so nearby was frightening to him. As the initial fear wore off, he started turning his head in every direction, his eyes searching for his mother.

All the time, his mom was watching him from a window, wiping her tears off. Those two hours seemed like a thousand years to both of them. As the day came to an end, it was difficult to say who was more happy that it was over, Mihit or mom.

But then came the next day and again, Mihit & his mom had to go through the same ordeal. A week later, the realization dawned upon him that the school wasn’t a one-time nightmare, but he was to go there every day.

At once he went up to his mother to tell her that he didn’t want to go to the school. Mother’s heart melted looking at his sad face and tears in his eyes but she threw a quick glance at his father and hesitated.

Seeing her dilemma, father offered to take him to school.

As days passed, taking him to school became an increasingly challenging task for both his parents. Mihit would cry, kick, start throwing things around, as the time to go to school neared.

One day his father returned from office with a wheelchair “Maybe he doesn’t like to be bound in one place. He would like it if he can move around” he said. Mother was broken into pieces to see him in a wheelchair.

Days passed and Mihit grew up. He didn’t have any friends in school and he hated the school as much as he did as a child. But he had learnt to accept it.

The kids would tease him, sometimes push him around and laugh at him. He mostly kept to himself, drawing as less attention to himself as possible.

He would sometimes visit a temple with his mother but otherwise mostly stayed at home studying & reading as the books were the only friend he had.

He scored well in every exam including the higher secondary board exams and entered a medical college, he was going to be a doctor.

It was a completely new world for him. To his surprise, he got a friend in the first week itself. They would spend most of the time together, be it going to canteen, library or studying.

One day the friend asked him “So what is your story?”.

“I mean what is wrong with your legs?” friend elaborated.

“I don’t know, it has always been like that, ever since I can remember.”

“Didn’t you ask your parents?”

The question had never occurred to Mihit. So next day he asked his parents and all they could say was he never walked, his legs didn’t have enough strength to carry him.

“But of course there must be some explanation to it” the friend persisted the next day.

The friend applied all the knowledge they had gained so far in the classes but was lost for a reason.

“Why is it so important to you? It is OK for me. I have accepted it as part of my life. It doesn’t bother me anymore” Mihit told his friend.

But the friend refused to give up. One day the friend forced him to stand up taking the support of the bar outside canteen and took away his wheelchair.

“What are you doing?” Mihit panicked.

“I can see that your legs are perfectly healthy and if you try hard enough, you may be able to walk,” the friend said in a matter of fact tone.

“Don’t be so cruel. It can’t happen. My parents have tried all the possible ways, they took me to the best doctors and none of that helped” Mihit said while running out of breath carrying his weight for so long.

His hands started hurting and his face turned red. But the friend kept observing his legs, refusing to give the wheelchair back. Only when Mihit was about to fall down, did he got his chair back. It took him few minutes to catch his breath.

“You are mean, you can’t be my friend.I hate you” saying this Mihit pushed his wheelchair away from his friend as quickly as his hurting hands let him.

Following that incident, the friend made many attempts to talk to Mihit but he refused to even look at the friend.

“At least listen to me once” the friend persisted even after a month.

“Tell me” Mihit turned his wheelchair and faced the friend.

“You are training to be a doctor. Does this sound normal to you? A perfectly healthy person is unable to walk and medical science is unable to explain the reason. All the doctors said there is nothing wrong with your legs or spine. All they could say that your legs are not strong enough. But you don’t have problems with your muscles either. What would you do, if a patient came to you with a similar case?” It made Mihit think.

“Will you at least try? For me?” the friend pleaded. “I know it will be painful for you. Maybe you will fall down and injure yourself. It may not even work. But will you as a doctor, treat yourself as a patient? I will help you in every possible manner.” Mihit stared at his friend for a while before agreeing.

They started with some exercises for leg muscles, accompanied by the strenuous attempts to walk with support.

It started with a minute of standing and slowly but steadily kept getting better. In a matter of few months, Mihit was able to stand without support for a few minutes and took few steps holding his friend’s hand.

Whenever Mihit wanted to give up, the hope in the friend’s eyes and reprimand in his voice would keep him going. Every time he progressed, they celebrated with a samosa in the canteen.

Unaware of the endeavour Mihit and his friend had taken over, one day Mihit caught his parents by surprise when he took a few steps without any support. Unable to contain their joy, they both hugged him & cried.

Mihit is still working hard to be able to walk long distance without a support but not giving up. He knows that he can not go back in time to catch those missed moments but sometimes he wonders what would life have been if he could walk as a child.