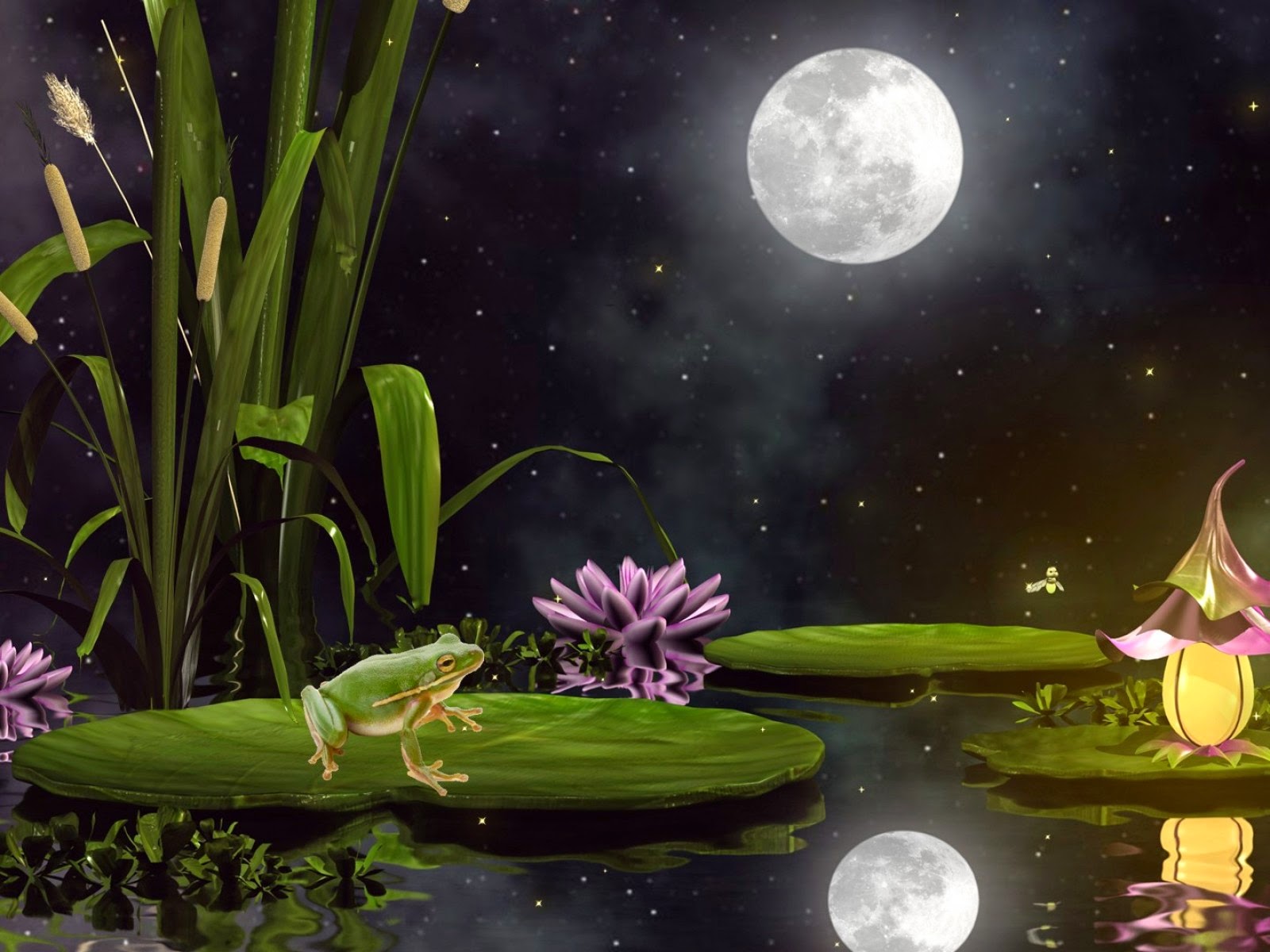 While circling the earth as usual, the moon’s eyes fell upon a beautiful lake on the earth.

There was a couple sitting by a beautiful lake. The man pointed towards the lake whispering something in the lady’s ear which made her smile. She turned her gaze to the moon and smiled again.

The moon pressed its ear hard to listen to what was he saying. He heard the man saying poetry about how beautiful the moon looked and how the woman in his arms was prettier than the moon. The moon chuckled.

But then his eyes fell upon the lake. He had never seen such a beauty. The lake’s water was still, occasionally disturbed by falling leaves from trees around it. It was partially covered with plants such as Lotus, Water Lilies and Water Iris. In the middle of all those flowers, was the moon’s reflection. He stared at it for few moments. “Wow I look handsome!” he said to himself. “All these years I have been so busy rotating around the earth and never even bothered to look at it” he wondered to himself while continuing hiss journey.

Next day the moon was eager to reach the spot of lake and check himself in the lake again.

He could hardly wait and wanted to run faster than his usual speed to see his reflection one more time. But as he approached the lake, he noticed that his brightness had reduced and his shape wasn’t a perfect circle like the previous night.

He was disheartened. Wondering why he looked pale than the previous day. Nonetheless, he continued his journey as usual.

As days passed, the reflection became thinner and paler. The moon started to worry what was happening to him. “I have been eating properly. Haven’t changed anything in my routine. Then why am I looking so thin” he said to himself staring at a thin line barely visible in the lake.

And the next day it had vanished completely. The moon panicked. He checked every possible corner and angle to no avail.

His heart sank “There must be something terribly wrong with me” he thought.

But he didn’t know whom to ask. He dragged his feet on his usual course for rest of the time.

But within a couple of days, he started to appear in the lake again. Slowly but gradually he regained his full size and brightness.

He was again looking at his handsome reflection in the lake one night. After few days’ observation, he realised that it happens periodically and became used to it.

As summer started, the water in the lake started to diminish. Every night the moon had to make an effort to check his reflection. One fine night, it disappeared completely leaving the moon clueless about why he couldn’t see his reflection anymore.

At first, he thought it was one of the regular phenomena when he vanished completely for one or two days. But he started to get worried when he couldn’t see himself even after a week had passed.

“Is there something wrong? Maybe I am dying” He grew sadder and sadder each passing day. He had lost all his interest in going around the earth and dragged himself all the way, every day. Days passed without the moon feeling any better.

All this time the god had been watching the moon. Unable to control anymore, the god approached the moon and asked him “What happened my child? Why do you look so sad?”

Seeing god, a ray of hope appeared in the Moon’s eyes. “Something is wrong with me. I can not see myself in the eyes of lake anymore. Have I lost so much weight that I am not visible? Am dying?” The moon asked eagerly.

The god laughed shaking his head in disbelief. “Come with me” saying this the god took the moon to an ocean. “Do you see yourself in its eyes?” the god asked. “Yes!!” the moon replied cheerfully.

“There is nothing wrong with you, there never was, even on the days when you find yourself thin and pale. It was only your reflection in the eyes of

It was only your reflection in the eyes of the lake which was changing. The water in the lake has diminished due to summer. Because of which there was no water left in it to show you your reflection.

All this time you have been sad over how your reflection is changing in one lake’s eyes, forgetting all about the greater role you play in the larger scheme.” The moon stared at the god with blank expressions.

“You are so precious to me. You are so precious to every living and non-living thing on the earth. You are the reason the oceans on the earth have high tide and low tide. You have contributed to the evolution of human life many thousand years ago. But you didn’t realise your importance in this world, wasting your time worrying about your reflection in one lake’s eyes” the god reprimanded.

The moon looked down with shame. “No matter what you look like in somebody else’s eyes. I have created you, not only you but every creature with a bigger purpose in life. Don’t waste it over petty matters such as how your reflection looks in one set of eyes. But think about your importance in all those lives affected positively because of you.” saying this god left.

Ever since that day, the moon has been continuing to serve his bigger purpose without bothering to check its reflection in anything.